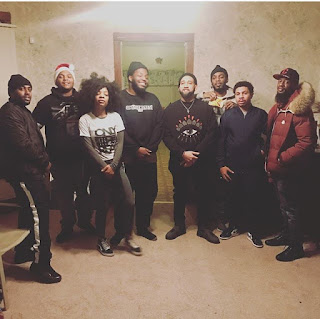 
Bump J is back. He been out that jam but musically, he is the Bump of old. Not the "Dinner Time" or even the "Move Around" Bump, but the "Introduction of a Gangsta" & "Welcome To Grimeyville" form with a whole lot more polish. Linking with Canon God DGainz adds that extra sauce that makes his cypher complete and once again we get to hear Mr. Johnson in rare form. This shit epic!


Live got P. Rico back at it with this joint "To The Top". Good to hear some new RIIIICCCCCOOOO

My nigga you will not blow C in the vehicle!


#TheChi is an essential this winter, Every Sunday 9pm Central on ShowTime. Bundo rarely has a negative word period to say about it, but last Sunday Jerrika (portrayed by Tiffany Boone) did something that would get 98% of Chicago's Black Male population sent to the county (on my kids). She had been avoiding her "Man" Brandon (portrayed by Jason Mitchell) who she put out the crib for getting involved in "Street shit" as she called it. No less than a week later she sliding to a function in his hood with another nigga. Broooo Bundo was willing to let go the fact Brandon let his opp Ronnie (portrayed by Ntare Mwine) slide at the Kick back (which is so unlike Chicagoans), but ain't no way a man who lost his brother, been kicked out the crib and gave his opp a pass is going to continue to take them type loses. A real Chicagoan two piecing dude she was with and if he ain't with domestic violence she a 100 type bitches undoubtedly. Love the show still, just gotta get hella more realistic.

Ignorance is bliss, so are these children
-Deji

Until we link again, show keep them taco's ducked!