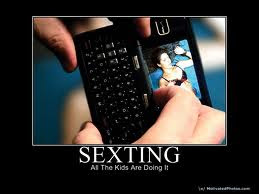 Sexting is still a relatively new thing, we'll atleast in my eyes. It still seems to be a very touchy issue. Everybody does it, nobody talks about it, basically. Honestly, I was rather shocked that the male response was so forthcoming with the truth. "Cock shots" are a regular practice for many of the male's I talked to about the subject. Every response was different into why they engaged in the activity, but every answer had one central theme,  the "Pop" shot eliminates all the bullshit when you just trying to fuck. Period. She can either be outraged never message back, or gauge her curiosity and see what its all about. All of the males reported after sending a "Shot", they usually receive pictures of the female that were well worth showing the "Shot" for. The consensus with most of the guys I spoke with, "It works, I will continue."
Women, I must admit having a double standard on the subject. I was shocked so many guys just take pictures, I actually thought it was MORE of a woman thing, I've received "Tit" and "Snatch" shots via text, I always though of "Sexting" as a woman thing. My apologies. Of the women I spoke with about the subject, most admit sending a "Pop Shot" before, but say Men are usually the ones to initiate the "Sexting". Most of the women I spoke with also encourage interested men in sending such texts. While a few of the woman said they do not send such messages and never will, they still like to get "Cock shots" via text.
So why the secrecy about it. Obviously its something EVERYBODY is doing. Brett Farve did it! Like damn
Do you send "Snatch/Cock" shots? Do you encourage others to begin the practice?