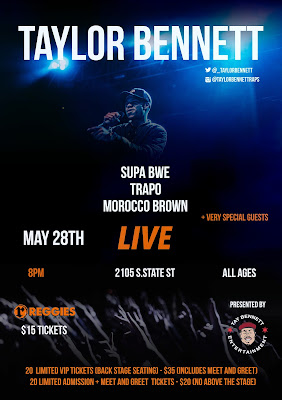 As we all know, warm weather this time of year in Chicago also brings the steady wave of music performances all across the city. Though live acts necessarily don’t hibernate in the winter, there is a sudden enthusiastic feeling about 70 degree weather and incredible performances inside and out.
This segues us to Taylor Bennett as he is set to host and headline his show on May 28th at Reggies Chicago at 8pm. Along for the ride are special guests Supa BWE Trapo, and Morocco Brown. Supa brings his talents to the stage as being an artist as well as a producer of his own music. He has been steady at work releasing ” Run a Check up” and “Breakfast & Chill” in the last two months. We can only hope to hear Bennett and Supa’s  extremely dope song “Show Me” during the show, which was dropped this past March. Trapo will be still fresh off of his latest release SHE including the HOT song “Chicago.” If you think he is from the Chi, check out one of his notable lyrics below and think again.
“I know you ain’t from Chicago
Neither am I though
Let’s just have a good time while we out here
Crack a bottle, I’m leaving tomorrow”
Morocco Brown breaks onto the scene as well being managed the none other than Taylor Bennett himself. Check him out on SoundCloud to familiarize yourself with his dope music before heading to the show.
If you have plans, cancel them! You don’t want to miss this show and wonder why you’re left out of everyone’s social media conversations. Here are the ticket price tiers:
$15- General Admission
$35- Limited VIP backstage seating(20 qty)
$20- Limited Admission Meet + Greet (20 qty)
Purchase your tickets and we will see you at the show!