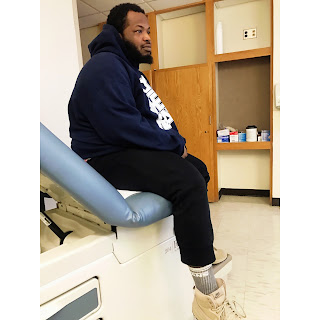 
Black people we must do better as a whole. The thirst for clout is so fucking real and ridiculous that it causes many to lose all judgement and cripples all rationale decision making. Famous Dex isn't an artist I check for, or even listen to but he's a man before anything and a fellow Chicago nigga immediately after that. What Crip buddy nem pulled was foul and goofy. Chain snatching is nothing new in hip-hop or even Chicago (Bow Wow had his chained snatch at Evergreen Plaza, Yung Berg got his chain snatched by Trick-Trick) its universally seen as a clout seeking sport amongst many I know. Chicao niggaz take shit, not snatch and run or just one item of jewelry, BITCH WE NEED THAT! So the fact that Dex kept his other jewels was smelling like a salmon dinner (fishy), Crip buddy ain't even robbing right. Then to demand features and all type of other fuck shit shows the true level of the thief we are dealing with, certified goofy. Dex we all taken some losses it will be bool, Crip homey find King Jesus!


Durk been keeping it real consistent and the trend remains with this "Durkio Crazy". It's a must to play this 3 times.

Chicago niggaz are fool fledged jackasses when it comes to police interaction and balancing effects of the drugs. Epic ignorance

Until we link again (tomorrow) slide back tonight for #O4TRRadio at 8:45pm and keep them tacos ducked!