6ix9ine is an idiot, but since when has that ever stopped someone from trying their hand at stardom? This morning Tekashi posted a video claiming he just touched down in Chicago solo (no security) and he's ready to take on the streets of Chicago. Great. Yes, blogs, Youtube commentators and podcasters alike are in a panic to make claims that he Brooklyn rapper is the second coming of The Terminator himself. But in Chicago we should know better. Bundoza would never tell you what you should be paying attention to, but there have been kidnapped kids and murdered women being from the West to the South Side. Sure, that might not be as entertaining but you'd be helping someone's Mom, Daughter, Sister, Aunt or friend live longer. It's time enough to be knowledgeable on both subjects, but Bundo a much rather see people threatening to kill a rapist than a email thug. My thoughts 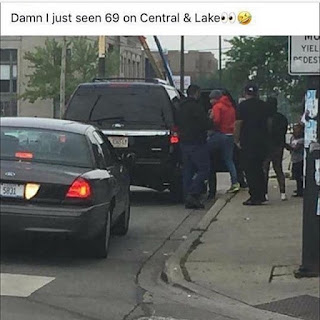 King Kyda dropped this in the inbox on twitter and it's been so long since I heard some shit from him almost forgot who he was. Pressed play on this joint and replayed it few times, you should do the same.

The Police might've been brutalizing dude (that's another story for another day) but this interaction with 12 is the funniest shit I saw today. Still Fuck 12

Think about all the good time you wasted having good times?

Until we link again tomorrow #DontSleep and listen to #Only4TheRealRadio