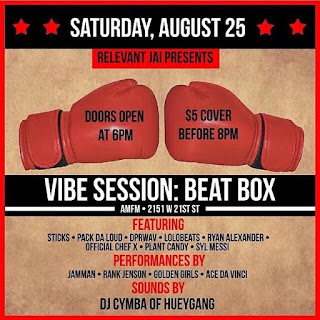 Relevant Jai is threatening to relieve the Chicago rap scene of her presence after her Vibe Session: Beat Box edition this Saturday 8.25.18 at AMFM Gallery 2151 W. 21st ST. 5$ admission before 8pm and yes, the gang will be in the building. Bundoza has been asked to be one of three judges of the three round competition that will have performances, taste makers and good vibes. For those unfamiliar with exactly what Ms. Jai has contributed to the scene do your homework

A staple for up and coming artist out of the city for many years now ChiCityHipHop is now defunct I believe. But the impact sites like that have/had on the music scene in Chicago is immeasurable. They gave the little guy a chance to shine and consistently followed artist and brands around the city. We all owe a debt of gratitude to the people who show love unconditionally. It's important