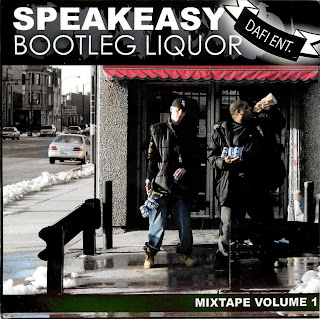 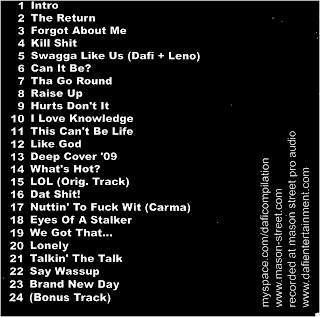 Last night I attended a Beat battle & Performance (Esohel) at The Bassment. In there under the lowkey act, I wasn't trying to draw attention to myself, I just came out as a fan. But unfortunately it wasn't long before I had to announce what I was doing there. SpeakEasy caught my attention because he was the only nigga in there spitting. He TWICE caught the attention of the ENTIRE CROWD because he was spitting over everybody's instrumental. But in no way was he lacking. SpeakEasy is an EMCEE. After that encounter he offered his mixtape, and business card. After listening to this Mixtape halfway, I had to share it with the masses. SpeakEasy is the truth! Real hip-hop fans will hear what i'm talking about.


Here are my selection off the Tape
I Love Knowledge
Contact info was limited, still hit SpeakEasy up and tell him how you were feeling his material
http://www.myspace.com/daficompilation
Be on the lookout for more Speak Easy & a link to the entire mixtape!
#SupportTheReal!