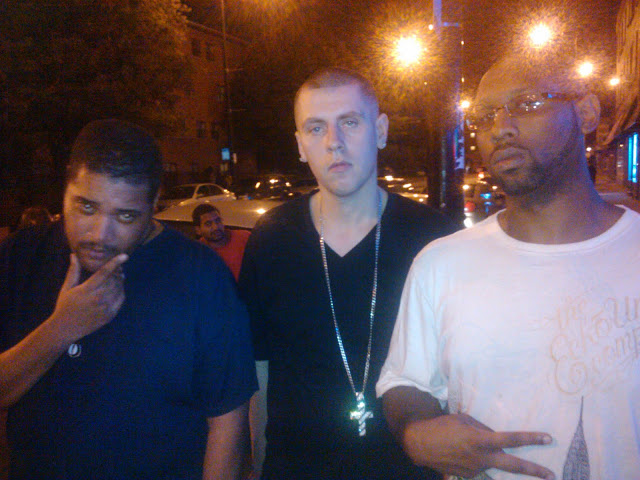 This segment of Salute To The Real™ feature two North Side artist making some noise in these city streets. SpeakEasy & Leno along with their manager John Dafi, form Dafi Entertainment. Saturday night outside of the Music Lounge (3017 W. Armitage) I got a quick interview from the Dafi ent. family. They spoke about whats going on with the label, new material on the way and who they'd love to collab with in the Chicagoland area. A brief but potent interview that everybody needs to check out.

Speak, Leno how long have you two been doing music?

SpeakEasy: For, I wanna say about 4 years for me personally. Because I used to freestyle at house parties & people would be like “Man, Why you don’t do this forreal?” I used to say “I just do it, to do it”. They would be like “Why?” That question really stuck in my mind, like “Why, can’t I do this and get something on the side?” I was just doing it for the love. For the love hip-hop.

Leno: I been rapping for over ten years. But as far as professionally recording about 4 years, Me & my man been linked up since 06 its been on ever since.

John Dafi: We’ve been grinding hard, going out of town real heavy. New York, Phoenix, Both these cats are crazy.

What separates you from everybody calling themselves a rapper?

John Dafi: You know what I say all the time is they have Godly voices. You know Rakim, Jay, Nas, When I hear Leno on the track, ain’t no other Leno. Dafi is all about setting trends not following them. Everybody wanna sound like the next man, dress like woo woo woo. We out here doing us. That’s the Real Deal.

SpeakEasy: What I really think separates us is we trying to come from some place. A lot of cats trying to imitate, do commercial music. I’m not hating on commercial music, I think hip-hop needs that, it’s a whole different lane. But at the same time, we have to come and talk about something that brings people back to the album & something they can really feel. Its really an emotional involvement.

Leno: Another thing that separates us from other people is, we don’t do a lot of talking. I ain’t in to that shit, telling you “What I do”, I’ma let you hear it, let you see it in front of you face. You be the judge.

Artist are often compared to one another, in relation to that who do you think your most comparable with?

Leno: Honestly, Nobody. I mean ain’t no nigga coming with my life story, my message, my voice, my style. I ain’t being compared to shit, because there is no comparison.

SpeakEasy: There is really nobody doing what we’re doing right now. That’s a beautiful thing, I think that we actually edged ourselves in to a certain angle where a lot of cats wasn’t hitting with hip-hop. It’s not like I have anything against commercial music or party music, we love party music. We make commercial music, but at the same time we have to have substance behind it, we have to have the lyricism behind it, because I look at hip-hop like an art or craft that I really want to bring back. 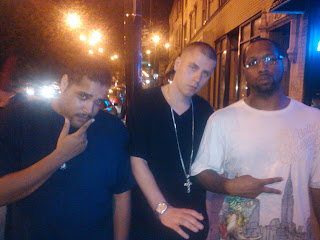 Leno: I feel like I have a lane, I consider my lane like a wide open expressway. I got like 4 or 5 different lanes that I can do, so my whole shit is an expressway. As far as a gimmick, I don’t have to have a gimmick. I’m a well versed person. Where I just don’t kick it one way, I just don’t do one thing. I’m an individual where I do a couple of things and that goes as far as my music. So a gimmick that’s not needed because I got good music, I got good beats, and as far as delivery and all that its all in the bag so as far as a Gimmick, Hell naw, I don’t need one.

SpeakEasy: As far as having a lane is concerned, even though I might have a lane for a certain day. It might change tomorrow. I might swurve into your lane, I really think that hip-hop has grown and evolved because of its versatility. And I really wanna be able to do things on every single level. Its like life, what you do on certain days, maybe you wanna party some days. Maybe you wanna be on some introspective some day, Maybe you have a good or Bad day. All of that stuff has to go into what your doing & if its personal and your really put your heart into it the music, its going to reflect that.

John Dafi: You know what our lane is? Real lyrics & Ill concepts.

As up-and-coming artist networking and collaborating is so important. Any underground artist that you check for, and that you really want to collaborate with.

Leno: It’s a few people, I respect a lot of the guys in Chicago, that are actually running a professional boat. Going out there promoting they shit, showing that they are self sufficient. Anybody that operates under those codes, and actually believes in putting some real talent to the table I’m willing to collaborate. But anybody specifically, it’s a lot of people I like in the city that’s doing they thing. YP, Voyce G.I. a host of dudes. I like anybody running a professional ship and they shit is dope. Period

SpeakEasy: As far as in the city, I gotta a lot of love for my cats up North. A lot of the cats I grew up with, Diverse, he’s done stuff with Mos Def. Longshot. It’s a lot of cats I grew up with, that I looked up to them when I was trying to get my stuff on. I was really trying to get my lyricism together and make sure that it was perfect, and they was actually doing stuff here around the city. So I really want to work with them. Because even though they’re not getting those big record deals, and all the other stuff. They really bring it to Hip-Hop and they really bringing it to Chicago Hip-Hop and they really representing they city. That’s the same thing I want to do. Lets all get together make some money, and take it to that next level.

Leno: Again if you running a professional boat, and your shit is on point, we want to deal with you. Like you probably already see we running our professional boat and we on some next level shit. So naturally all of us who are really getting it. We gon collaborate. Much love to anybody getting it.

John Dafi: I listen to L.E.P. I like they movement. YP, MicTerror he on point. That’s basically it.

What’s next for Leno & SpeakEasy?

Leno: My album is 95% done, Got some bangers, 10 or 11 singles on that bitch. Hip-Hop, all diverse shit. I guarantee motherfuckers gon be banging this next year. I got shit on there for everybody, I ain’t just saying that to sound cool or nothing like that. Raw lyricism, pure originality. Some of the best producers, shoutout A-Ok, my man Cloud nine from Toronto. Ill Brown. We all came together to make a real diverse & great portfolio for my first project. So llok out for that on I-Tunes, way more videos the next one is “Roll with me”. My other shit “How you like it” which got me in the source with Meal Ticket and them, be on the lookout for Keyzoo Kane “Global Business” , “How you like it” is featured on that tape, getting nationwide distribution. We got a lot of shit happening. It’s a great fucking year, I’m ready to take over. I’m in beast mode, I feel nobody can stop me, I feel like nobody has a great portfolio like me, I feel like im the most diverse nigga out here. Me and my man SpeakEasy I’m proud of his accomplishments. Everybody fuck with us. Dafi Entertainment, we entrepreneurs, we businessman, we artist. We out here taking this shit seriously, so please ya’ll just open your ears.

SpeakEasy: Literally, I know people hate me for my patience. Just because I know we got the talent, the drive, the production, We got everything going on. I’m not even worried about it. It’s to the point like we can go in the booth and murder any track we on. That’s not coming from an egotistical stand point, that’s coming from a place of pure confidence. Working on the next mixtape which is Bootleg liquor Volume 3, I mean Volume 2. I’m already training for volume 3. My first album coming out “Behind the eyes of the nice guy”. Cat’s just not ready. Minds will be blown by what I got planned for them. I guarantee you look for SpeakEasy its guaranteed to be there.

(Be on the Lookout for more Salute to the real interviews soon. And interested hit the email. Fakeneednotapply@Only4thereal.com)

If you need to contact the Dafi Entertainment camp, hit em up at
http://www.myspace.com/daficompilation
DafiEntertainment@gmail.com