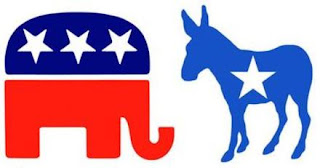 I always keep an open ear and open eye whenever someone uses the word politics.  Most people don’t even use it in the right context, but they think they understand it.  I hear it a lot, dare I say way too much, in relation to hip hop.  In this brief article I want to break down some aspects of the "politics" as it relates to hip hop.  I will use mostly local examples as that’s what Im most familiar with.  So throw out all of the images the word may conjure up of Mayor Daley or Barack Obama and career politicians and lets move it to another context.
I really hate that I took so long to write this article as I have been bouncing the idea around in my head for quite some time. I was struck by a conversation on twitter between a few of the local players on the Chicago hip hop scene. We will call them Barry and Mary. Mary complained that deserving Chicago artists were being overlooked and not booked for shows or played on the radio because of "politics." That was her answer and justification. Barry insisted Mary explain further.  She named some local artist that she felt were talented and told Barry that they can’t get played on the radio because of "politics." She also said politics came into play when artist were getting booked as supporting acts for major shows in Chicago.
Barry pushed for Mary to drop names and explicitly say who does not support or book certain artist. Mary resisted, and instead she maintained that it was all "political" and that it was holding "us" (chicago music scene) back. Barry, known to rant on twitter, pretty much dismissed Mary at that point because she would not, or I would argue, could not get into specifics or name drop.
In my opinion the whole situation showed a lack of understanding about the very essence of politics. Politics is about making decisions. The "politics" people often refer to are the tactics used to influence or sway decision makers to make a choice favorable to their own agenda.  So in redefining the words to the context of the twitter conversation lets look at the DJs, music directors, and promoters as the politicians. They have the ability to DECIDE who gets played on the radio/club and who gets shows in the case of the promoter.
Lets take theses transformed definitions of the politicians and take a look at the groups trying to influence them.  So now the artists, record labels, and club owners become the constituents with concerns and agendas.  Now it's obvious that the decisions the politicians have the power to make are, hopefully, in line with what the constituents want right? Of course! (sarcasm)
Next we have to analyze HOW decisions are made. This is the point where the interests of the politicians (DJs, Program Directors etc) and the constituents (artists, labels etc) intersect and overlap. In BUSINESS, as in life, most decisions are made by the way they may/or may not affect the bottom line.  Sometimes the decision maker has his own selfish reasons for making a decision.  He/she may be doing favors, or make a decision for any number of reasons that may or may not make sense to the people affected by the decision.  This again is where the "politics" lives. How do YOU influence that decision?
You feel that you or your artist has the hottest shit on earth (and you should) the politician doesn't know YOU, and in his current comfortable situation making money, living life - he doesn't necessarily have a good reason to be seeking out your HOT shit.  I have been (and am still) on both sides of the game as an artist (constituent) and promoter (politician).  Those two interests are at opposite ends of te spectrum at times.  Being concerned about the integrity of the art is first and foremost, BUT as a promoter the cliche rings true -- "if it don't make dollars it don't make sense."  So you can absolutely have the hottest shit I have ever heard in my life, but if you don't have a significant following as an artist -- it does nothing for me as a promoter.  It may sound selfish but it's not.  It's a testament to the cyclical nature of business -- "If I can't eat (and I'm the breadwinner) you can't eat."
So don't run around saying that I'm not messing with you because of the "politics" when You have nothing significant to offer Me.  Unless, of course, you prove to me otherwise by politicking and networking (in the words of Lil Boosie).  You ever stop to wonder why people sign petitions, form organizations, or otherwise do things to consolidate POWER in order to influence politicians?  Well the answer is because without consolidated Power (or big $$$), most times you have no other way to COMMAND meaningful attention from decision makers! Most decisions made (some would argue all) are self serving in nature. So when you are making your case you must first show how you can and will serve those interests without compromising your own. This holds true for all decisions because remember that's the "politics"
____________________________________________________________________________
Independent Chicago Artist its time to come together and let's COMMAND our respect, earn our place, $upport ourselves and our art!  Join my email list/ email me to become a part of the force that is going to change things or be left out!! That's my 2Cents.
P1
$upportIndieMusic
Http://bit.ly/P1Verb
Pheature Nov. 20