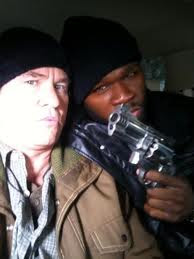 In the new film "Gun" Starring 50 Cent and Val Kilmer, Kilmer plays an Ex-con who has just been released and looking for work. He contacted an old friend (50) for employment and instantly rises in the ranks of 50's street army.

50 and Kilmer's then grew so close, 50 made him second in charge. Kilmer accepted and did everything asked of him by 50. Until the moment came to take down 50. Val Kilmer had to reveal his undercover Donnie Brasco side. He had been released by the state to aid in the capture & conviction of 50.

No problem with that. He just doing his job. WRONG!

Kilmer's whole plan was to kill 50 once he had the opportunity to do so. 50 shot up a club with rival gun sellers outside and Kilmer's wife was an innocent victim.

But instead of Kilmer setting out to complete the mission, he cooperated, only after bitching up & not killing the man he vowed to. Killing is bad. But jail is worse.

Val Kilmer you won't win an Oscar for this role, but you are unanimously selected as a #Fucknigga!

Mr. Kilmer this is dedicated to you
Tony Yayo - Somebody Sitched 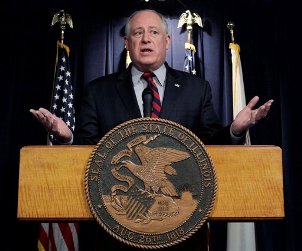 On a much more serious note,  the number 1 fuck nigga this week has to be the Governor of Illinois Pat Quinn. This week Gov. Quinn decided to end the "Put Illinois to work" program. Before he was elected in November, this program was the single most important thing on his agenda. Even infusing the program with state funds after the Federal funds ran out. Now he says we no longer have the resources to run this program, conveniently just two months after the election? First, you didn't back your homeboy Blago, NOW you pull the biggest Fuck-Nigga move since Daley thought it was smart to not shovel side streets!


Pat Quinn you are truly the epitome of a #FuckNigga!
I dedicate this Yo Gotti - i'ma stay real till its over to you Pat Quinn. You ain't never been REAL! Harold Washington knew that!
(Stay tuned for next weeks edition. If you are, or know a fuck-nigga, speak up and call them on it before its too late!)