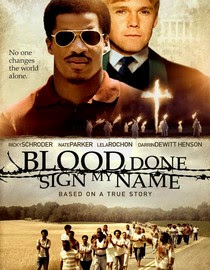 Got another one for ya'll to checkout. Easily accessible  for those with them young Netflix accounts. The name of this flick is called "Blood Done Signed My Name". It details the death of a Vietnam veteran and his murderers who were acquitted because of the color of their skin & not the evidence. During the trial a white pastor tries to integrate his congregation, at the same time A black school teacher named Ben Chavis begins his own crusade.
While this film is not flooded with A-list actors it will entertain you with a cast of notable black actors. This should be something played for the kids during Black History Month. Truly a good movie, not GREAT but decent. Remember who put you on!