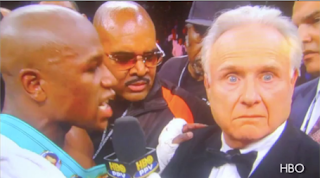 Larry Merchant. Everybody is afforded the freedom of speech. But I believe many people use that right as a freedom to hate. Floyd Mayweather Jr. (whether you love him or hate him) knocked Victor Ortiz the fuck out legally. Larry Merchant's job is not to throw his own OPINION into his work. Merchant continued asking Floyd questions pertaining to only what he wanted to know. No congratulatory gestures at all. Then he began to talk about what he would've done had Floyd approached him 50 years ago.
Larry Merchant you may be white, and this may be the first time someone has ever referred to you as a nigga. But Mr. Merchant you are a fuck nigga. It's ok to feel how you feel, but it's never ok to hate on another man after he was just victorious no matter how you feel. If I was Floyd I'd keep a goon around for every age range. Have a 80 year old goon at the next fight to beat dog shit out of Larry Merchant if the same situation arises. 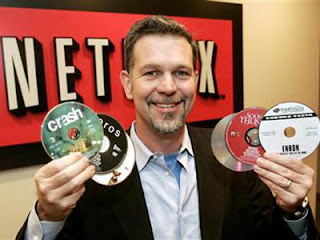 Meet Reed Hatings CEO of Netlix and whatever they are calling it now. This fucking guy is a close second to Larry Merchant this week in his Fuck-nigga-esque behavior. Reed Hastings gave a half hearted apology to customers and shareholders for his decision to fuck up the entire Netflix company. In February all the Starz content Netflix addicts like myself enjoy will be gone, thanks to the inability to reach an agreement. The price hike didn't seem so extreme at first and I even stayed on with just a streaming plan. But if Netflix doesn't come up with a way to show us some good shit and report some good news, I'm prepared to say fuck em.
Mr. Hastings for your actions and role in fucking up, what was once a beautiful thing, you are so deserving of this Fuck-Nigga # 2 of the week.
Submit your choices for FuckNigga Weekly
to
FakeNeedNotApply@Only4TheReal.com
#DontSleep