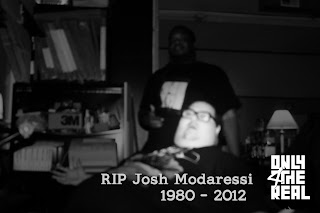 Josh Modaressi passed away December 30th, 2012. I last spoke with him December 11th. If you ever heard O4TR Radio Josh was the funny sounding white guy that always chimed in at the perfect time. On Air he was always there to save our show from dead air, lending advice and his personality to add a whole other dimension to the show. When he got sick I never imagined not seeing him again. Danny Brown assumed Josh's engineering duties and the show went on. As far as technical work Danny was way better than Josh. The station was cleaner, Danny added some new features to the booth that made our lives way easier. Even with the update to the studio and offices Slam Internet Radio was not the same without Josh. He called me a few weeks before he died and asked when I would return to the air. I told him my circumstances but I promised him if he showed up that Sunday I'd do my show and bring him Harold's from the Southside. We laughed about it. I text him a few days later informing him that we wouldn't make it and that we needed time to work on our show to make it better. And that one day I'd be back. He never responded. I thought maybe he was angry with me for the sudden cancellation. I now know that wasn't the case. For the past few months I had been texting Josh's number so we could get the show running again. No Response. Finally after 5 attempts I decided to go on SlamInternetRadio.com and get some contact info, that's when I found out the news i'm writing about.

The first time I met Josh I was guest on another show Chi-Bangerz Radio. After I left out the booth he had already struck an agreement with one of my homeys about starting our own show. He always talked about SlamIR taking off and his love for rap. He told me the first night I met him to stick with radio shit, I had a voice for it. Josh believed in O4TR Radio and what we were trying to do. I miss Josh and I think about him a lot more knowing he's gone. I wrote this just to tell the world about this man that forever changed my life. He believed in me and my dreams and offered me the opportunity to make them true. I really want back on air now, just to show Josh that we gon make it. And he still coming with us.